The Bonnie McCallum Environment Award was presented to Sue, July 7/08 in Guelph in recognition of exceptional commitment to the community through the environment. 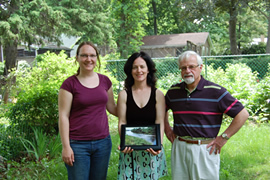 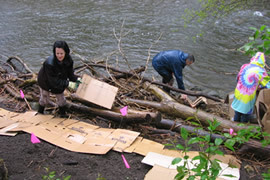 to read more: http://www.opirgguelph.org/ or view the Press section to read the Guelph Mercury Editorial

On August 27 Sue Smith Played at The Carlton. See Calendar for details.

Sue will perform a duo show with Jeff Bird on April 19 at RIVERVIEW in Guelph; an intimate evening of song and music.

The Season Singers is a theatrical choir for children, guided by Artistic Director Sue Smith and Designer/Artist Barbara Jean Bryce. This show marks the twentieth session of Season Singers and hails the start of a new era: "A LITTLE BIT OF THUNDER" is the first Season Singers production to include all new, original music written by Sue Smith, Gwen Swick, Barb Bryce and Jeff Bird. Titles include, "A Little Bit of Thunder (Really Makes My Day", "Corn, Peas, Carrots and Potatoes", "She Grants Wishes", "This is the Work of Thor", and more!

Meet the farmers of Left Field who sing and dance to make their plants grow. Meet Thor, renowned God of Thunder and his big sister, Mor, who bullies her little brother into causing terrible problems for Left Field . Not even the revered Fairy Godmother can help solve the torment. Only a mysterious visitor, with an unpronouncable name, wished into existence, has the answer. And it has something to do with a hammer named Mjolnir, a goat named Atlas and two engineers from th¹üwÐê e StarMaker Laboratory named Dante and Rossetti.

Thanks to all who signed the petition expressing concern about excessive pruning of Guelph's park trees. The city has agreed to cease trimming of all conifers within city parks pending the development and adoption of a tree maintenance policy - required lots of public input. This is good news. To read the petition click here .

Check out the new galleries.

I’M SO is now available on i-tunes.

Sue will be touring from Ontario to Nova Scotia in late August in the company of multi-instrumentalist, Jeff Bird in support of "I'm So" including dates in Ontario, Quebec, Rothesday, NB, Canning and Halifax, NS. See Calendar for details.

Sue's Iceberg Photo Cards are now available at Maplemusic.com. These cards include Sue's favourite photos taken while visiting the world's most productive iceberg calving fiord at Illulisat, Greenland, summer solstice 2000. All photos were taken by Sue after midnight from aboard a small, double-hulled boat that looked like an elf's shoe and cruised warily about the fiord.